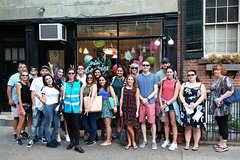 What better way to see the splendour of New York City than through the eyes of its Superheroes?! our world famous Superhero Tour of New York visits film locations from the major Hollywood blockbusters as well as real life comic locations.

The Superhero Tour of New York shows you firsthand the prime hangouts of radioactive latex loving spider heroes, vigilante bat-people and delves deep into the benefits of wearing spandex briefs... Did you know comic books and superheroes were invented in New York in the 1930s?! The city continues to cast its influence over the genre to this day in both comics and films. In the DC Universe New York is the inspiration for both Gotham City and Metropolis. And in the Marvel Universe characters such as Spider-Man, the Avengers, Ironman and the Fantastic Four inhabit the real New York. See it all on the Superhero Tour of New York!
ITINERARY
• The Avengers See the battleground where The Avengers fight for humanity on the streets of NYC
• Men In Black Locations from the latest MIB franchise
• Batman The former Park Avenue offices of Batman creator Bob Kane, and Will Eisner, creator of The Spirit
• Spiderman Instantly recognisable Spidey locations from all the films
• Fantastic Four The ‘real’ location of the Fantastic Four’s fictitious Baxter Building
• Empire State Building The NY landmark has featured in countless Superhero adventures, find out which ones!
• Flat Iron Building Not only was this The Daily Bugle in Spiderman, it has featured in countless other films too
• Chrysler Building Spidey's regular perch when he's using his spider-sense, this incredible skyscraper has a long association with Superheroes
• Grand Central Station Find out which Superheroes have battled in this magnificent train station
• The News Building Step inside Clark Kent's workplace, The Daily Planet offices are here
• New York Public Library Where Uncle Ben told Peter Parker, 'With great power comes great responsibility!'
• United Nations Where Batman and Robin saved the Security Council from the "fearsome foursome" of Joker, Penguin, Riddler and Catwoman
• The apartments of Lernore Lemmon (suspected of killing George "Superman" Reeves ) and across the street Kirk Allan (the first Superman 1948) - no they did not knew each other!
• The hidden bar where comic book artists have been drawing superhero cartoons on the walls since the 1960's
• And much, much more…
NEW YORK LANDMARKS AND ATTRACTIONS
• Empire State Building
• Grand Central Station
• Flat Iron Building
• Chrysler Building
• United Nations
• The Avengers
• Batman
• Spiderman
• Superman

What better way to see the splendour of New York City than through the eyes of its Superheroes?! our world famous Superhero Tour of New York visits film locations from the major Hollywood blockbusters as well as real life comic locations.